Multiplayer games of any sort have always brought an intriguing scenario to the forefront. The same is true of the Baccarat Multiplayer release from Betixon, too. Launched in April of 2016, the game has remained a popular option for those people who want to take their baccarat gameplay to the next level.

Naturally, the obvious great thing about this game is that it allows a multiplayer function to take place, seeing several people placing bets on the same game. So, let’s find out what else this game brings to the table in this review, and if you’d like, you can play a demo version of it, too.

Grab the welcome package at our recommended casino and enjoy a game of baccarat online.
Play Baccarat at 22bet Casino
Rating
BetixonPCSmartPhoneTablet

With its multiplayer feature, this Baccarat game by Betixon brings an interesting twist to your casino experience.

When you play Baccarat Multiplayer, the basic rules behind it are much the same as any other standard variation of baccarat. So, your task is to guess the outcome of the cards dealt to the player and the banker. Whichever hand is closer to 9 in total will be the winning one. Alternatively, you can bet on there being a tie result.

The cards are valued at the same level as they are in many other variations of baccarat. This means that all Ace cards have a 1-point value, the cards of 2 to 9 are valued at their face number, and the 10 through to K are all worth 0 points. At the start of gameplay, two cards are dealt to the player and two to the banker. The first card is dealt face-up, while the second is dealt face-down. A third card may also be dealt out, depending upon the totals from the first two. The player hand receives a third card primarily, and this occurs if the first two cards equate to less than 5. The banker may then receive a third card, depending upon the total in his hand after the first two have been dealt.

So, with those basic details behind Baccarat Multiplayer’s gameplay in mind, you may want to check the game out for yourself in practice mode. Well, look no further because we have the demo format of it for you to access and put your skills to the test before you proceed with real play. 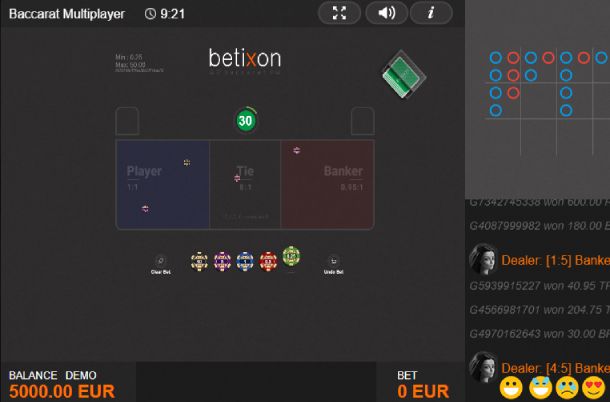 About the Gameplay Created by Betixon

The interface of this variation of baccarat is quite a simple one. You’ll see the three betting options in the centre, a selection of poker chips at the bottom of the screen and a countdown timer above everything. The first process is to decide upon the wager that you want to place in the game, which is done by selecting one or more of the chips from the game screen and placing them on the relevant betting space – Player, Tie or Banker – depending upon which you believe will be the better scoring hand.

You’ll need to add your bet before the countdown timer reaches the bottom, and you’ll be asked to confirm the bet with a click of the check button. It’s important to remember that Baccarat Multiplayer has bet limits of between 0.25 and 50 per round ton adhere to, too. There’s no need to hit any kind of deal button because once the timer reaches the bottom, this will take place automatically. The timer is there to give everyone accessing the game the possibility of placing a wager. Once the timer hits the bottom, two cards are dealt out to the player, and then the third-card rule is checked over to see if the player and/or the banker receives an additional card.

You can clear your bet at any time during the countdown by hitting the Clear Bet button or remove one by clicking Undo Bet. A button is present in the top-right corner to full screen the game, and another one is there so that you can mute the volume. Clicking on the ‘i’ gives you a view of the rules and paytable.

The Payout Ratio of the Game

The Baccarat Multiplayer game from Betixon provides wins on a player hand of 1:1, while a 5% commission is charged on winning banker hands, meaning that the ratio stands at 0.95:1 for this result. If a tie result is the outcome and you have wagered on this being the case, then you’ll receive a pay-out of 8:1 for such.

While not specifically being a special feature within this game, the multiplayer part of it does bring a new edge and twist on playing baccarat. Rather than betting on the outcomes of the hands by yourself, you get to witness what other players are choosing to hedge their bets on during gameplay, too. This makes it altogether a bit more appealing and can be quite helpful to players who aren’t as familiar with accessing online baccarat.

You will also be able to view a table on the ‘i’ page of the game, which displays the specific rules as to when the player hand and the banker hand get their respective third cards dealt.

Baccarat Multiplayer may seem like something that seasoned players would be better off accessing from its title, but actually, it can be quite the good game for a newcomer to start out with. Why? Because they get to see what all other bettors are wagering on during gameplay, and this could potentially provide some insight into playing the game in solo action themselves later on.

The game is intriguing enough, although the setup is fairly basic overall, so perhaps it’s not quite as intriguing for VIP players to engage in.

Other Baccarat Games to Try