Net Entertainment, better known as NetEnt, was formed in 1996 by a leading Scandinavian offline casino operator. With such a solid grounding in the industry, it’s no wonder this software developer has made such a success of its endeavors. Along with names like Playtech and Microgaming, it was one of the first providers of internet casino software for the industry. Founded in Sweden, it’s traded publicly on the Stockholm Stock Exchange as NETB:SS. It has been able to produce some of the most exciting casino games and been entertaining players with a great range of games.

The specialty of this innovative developer is its slots but it is also able to offer players a variety of other table games such as blackjack, roulette and baccarat. Unlike a number of other software providers it doesn’t operate its own casino and is therefore able to focus solely on providing the best quality games. As well as its offices in Sweden. There are also offices in Malta, Alderney and Gibraltar. Its main product is called CasinoModule, which takes care of the online side of things. But it also has a unique product called CasinoCafe. This is a product aimed at businesses such as internet cafes, that want to start their own casinos using computer terminals.

Net Entertainment and what makes it stand out from the competition

Founded in 1996, and born out of the experiences of a land-based operator, NetEnt offers top quality casino software with games that typically return 95% back to players. The company believes this is one of its unique selling points and we’re inclined to agree. The games also have a reputation for being of the highest quality, with rich graphics and attention to detail. Other features of the games that make them so popular are the bonus rounds, animations that are very realistic and some very exciting features. In terms of market share, NetEnt doesn’t have quite the same following as Playtech and Microgaming but those that play the games are very quickly hooked on the experience and aren’t willing to swap it for anything else.

A good number of operators currently use the NetEnt software and the client list includes brands such as Mr Green Casino, Paddy Power and Comeon Casino. The packages that are provided include solutions for both front end and back end support and is easy to integrate into whatever structure an operator has adopted. All the traditional casino games make up the portfolio, such as blackjack, roulette, video poker and baccarat, as well as some pretty amazing slots and mini-blackjack games.

All the games are very user-friendly. And one particular feature we happen to like is the free games. Play as much as you want without having to worry about downloading, registering or making a deposit. You might think this is not too different than a number of other software providers. But the difference with NetEnt is that it doesn’t seem to mind letting players know they can play for free and it features alongside the ‘play for real’ versions of the games. Being able to play the games for free before risking any real money is important. It allows players to get to know a game first and make playing the game second nature before it’s time to spend any money.

The number of casinos that choose to offer NetEnt games, either as a full blown casino platform or by integrating the games into their own systems, is constantly growing. It has become very popular for online casinos to use the services of more than one developer and NetEnt make this possible because its games are able to slip seamlessly into other systems. The games are very user-friendly and the flash-based games have some great graphics. Most hardware being used is suitable because the play speed and image quality of the games is fully adjustable. If you are at all unsure about how to play a game and the rules, simply click on the question mark in the corner of any game and you’ll see all the rules as well as the theoretical return of the game. And that includes the slots and scratchcards, which is a feature rarely seen anywhere else.

NetEnt likes to take care of the low limit players as well as those with much bigger bankrolls and offers some of the mot budget-friendly betting ranges out there. For example, for blackjack they range from €0.1 to €500. while in single-line video poker they are from €0.01 to €100. Many of the table games have multiple versions depending on whether the players are small, medium or large bettors.

As we’ve already mentioned, the biggest section of games is slots. There are plenty to choose from, with some very entertaining themes and top quality artwork. One of the most popular is Guns n Roses, but there are plenty of other popular titles. The selection of table games is nowhere near as impressive but there are some good quality games.

Baccarat is one example of the quality of NetEnt’s table games, available in two formats. One is just called Baccarat Pro while the other is called Punto Banco. The former game uses eight decks, and Punto Banco uses six. This difference in deck numbers means there is also a small difference in the odds.

Baccarat Pro was released in three versions – a standard, a low-roller, and a high-roller version – with betting limits varying from €0.1 to €1,000. There is also an additional VIP version. The games feature the signature outstanding graphics and high RTP that have earned NetEnt’s popularity, as well as a number of options for a premium gaming experience, including audio control, fast play, and history.

Below, you can try Baccarat Pro Low-Limit for free and see for yourself how the flexible betting range, easy-to-use menu with numerous options, and history panel afford a premium gambling experience and allow applying various betting strategies. 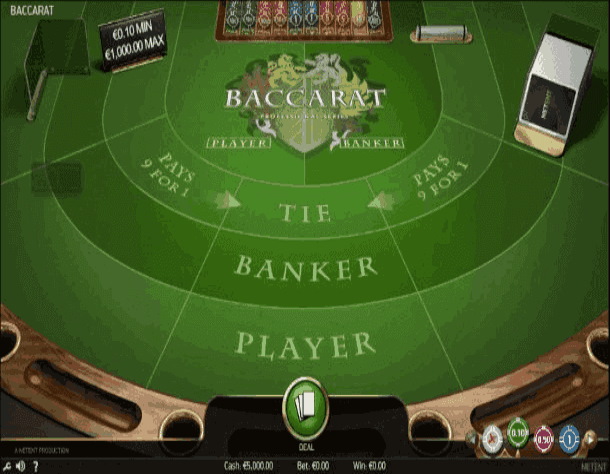 The other casino games that are available include:

The NetEnt live dealer casino has been open since 2013

NetEnt has been offering live dealer action for casinos since 2013. it may not be as popular an option as other live dealer games providers but the numbers are steadily growing. There is a nice edge to the format which is provided by the adjustable sound preference and option for different languages. What is being offered is still very much in the early stages but if this quality is anything to go by, the future looks very good indeed. A very recent development we’ve uncovered is that a selection of the live casino games can now be enjoyed on a mobile device. And is yet another innovative feature that makes this developer stand out from the competition. Currently, only blackjack and roulette are offered, but we hope there will be a much wider selection in the future.

NetEnt has been upwardly mobile for a number of years

NetEnt has been giving players the opportunity to play a selection of their favorite games for a number of years. It is also at the forefront of mobile gaming thanks to a range of games specially designed for mobile devices. It’s called NetEnt Touch and began life in 2011. So far it has been very well received and allows players to enjoy the same features as desktop versions of the games. Including all the same bonuses and free spins. Making use of a simplified keyboard and navigation that poses no problem for small screens it can be viewed in 22 different languages and players can make payments using 25 different currencies.

NetEnt is a respected brand and as such is fully licensed and regulated. Several gaming authorities, including the UK Gambling Commission oversee its operations. Other bodies include those in Gibraltar and Alderney. For complete user confidence in the brand this provider also offers itself up for independent auditing by eCOGRA. Its games are fully tested so you know when you choose to play you’re not going to be swindled.

NetEnt is also very conscious of its responsibilities with regards problem gambling. Players are able to set their own gaming limits, budgets and boundaries. One special feature prevents players from logging in for a certain period of time. It can be seen as an enforced cooling off period, during which players can still receive emails and promotions from a particular baccarat casino.