If you have ever played baccarat, you may have seen grids covered in red and blue circles, dots, and lines. These are known as baccarat roads or roadmap scorecards, and they can appear hugely confusing. Here we will teach you all that you need to know about baccarat roads so that you understand just what they are about.

What Are Baccarat Roads? 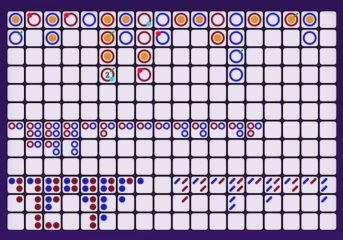 Baccarat roads are simply a way of spotting trends in the results of each round. There are several types of roads and each one performs a different type of analysis. They help players understand the history of the game and spot any patterns. Some players will also use baccarat roads as part of their strategy to try to extrapolate what will happen next.

Each road consists of a grid that is populated with colored dots and circles and in some cases, lines. The grids are usually six cells high, and they can be many cells wide as theoretically, a game can go on indefinitely. However, the meaning of the different colored circles changes depending on the particular road.

There are several different roads but the most common are the Beat Plate, the Big Road, the Big Eye Boy, the Small Road and the Cockroach Pig. Here we shall take you through each in turn and explain exactly what it means.

Usually, the Bead Road baccarat has at least six rows and twelve columns, meaning that it can record the result of at least seventy hands. Players begin in the top left corner and move down one row at a time. When the bottom of the column is reached, then players start again at the top of the next column to the right.

The Big Road is called such as it was the first road to be used and all other roads are derived from it. Its purpose is to identify trends by highlighting consecutive wins for either the Player or Banker. In some ways, the Big Road looks like an upside-down bar chart with alternating columns of blue and red dots. The blue dots represent Player wins and the red dots represent Banker wins. Each time that the winning position changes, e.g. from Banker to Player, then a new column is started.

If a round ends in a Tie, then instead of starting a new column, the last entry in the Big Road is struck through with a green line. This is simply because ties are very rare and it is unlikely that there will be two in a row.

The Big Road is usually six rows high. If a position wins more than six times in a row, then the streak turns right when it reaches the bottom of the grid and continues along the bottom row. This is a pattern known as “the dragon”. Once again, Pairs are marked with dots, blue for a Player Pair and red for a Banker pair.

The Big Eye Boy in Baccarat – Interpreting the Big Road

The Big Eye Boy road, also known as the Baccarat Big Eye Road, is what is known as a derived road, as it interprets the information from the Big Road. It shows players whether there have been discernible patterns from the shoe so far or if the results have been random.

The way the Big Eye Boy is filled is not simple:

The good news is that if you have understood the Big Eye Boy, then the Small Road is easy, as it works in exactly the same way. There is just one important difference; it skips the column to the left of the current column in the Big Road.

In order for the Small Road to have enough information, it is not begun until the entry after the first entry in the Big Road’s third column.

The Small Road is recorded as follows:

The Cockroach Road – Searching for Trends

Also known as The Cockroach Pig Road, this is the last one you need to understand. Once again, it is similar to the Small Road. However, this time it skips two columns to the left of the Big Road’s current column. Before starting the Cockroach Road, you need to wait until the entry after the first entry made in the Big Road’s fourth column.

The Cockroach Pig is recorded as follows:

How do you read baccarat roads?
Each baccarat road is read in a different way in baccarat. They consist of red and blue circles that represent the results of previous hands in different ways. For instance, with the Bead Plate Road, a red circle represents a Banker win, a blue circle represents a Player win and green represents a tie. If you want to learn exactly how to read all of the different roads, then simply take a look at the explanations on this page.
How can I use baccarat roads to place a bet?
The baccarat roads are there to show you patterns in the results of previous rounds. Some roads, such as the Bead Plate, simply show the results themselves and it is up to you to spot the patterns. Other roads, such as the Cockroach Pig, highlight when there is a discernable pattern. If you believe that the next hand will follow a trend highlighted by the roads, then you can place your bet accordingly.
What are derived roads?
Rather than showing the results of previous rounds, the derived roads look for patterns that can be discerned from the Big Road. Each of the Small Road, the Big Eye Boy and the Cockroach Pig zooms out to a different degree to see if there is a pattern. Essentially, they show how repetitive the shoe is (or isn’t). If a derived road a pattern, then players may wish to assume its continuation when placing their next bet.
More Recommended Baccarat Casinos