What are baccarat shoes? While the shoes primary purpose is to store cards, in some versions of baccarat, it is passed from player to player as the game progresses. As a result, many people have questions about the shoe, and here we will explain all that you need to know so that you can approach the game with confidence. 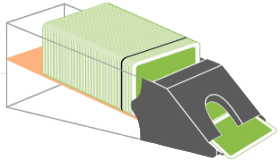 The shoe is simply a box in which the cards are stored and dealt from. The number of cards in the shoe, and therefore the number of hands, will depend on the casino you are playing in and the version of baccarat being played.

Whether you are playing online or in a land casino, the most common version of the game is Punto Banco. However, it is worth taking a few minutes to look at all three versions of baccarat.

The average number of cards used in a round of Punto Banco is 4.94. Therefore, if you assume 15 burn cards and a six-deck shoe, there are about 60 hands per shoe and about 81 hands with an eight-deck shoe.

Very often, a cut-card is placed in front of the seventh from last card in a shoe. When the cut card is dealt, it indicates that it is the last hand to be played from a shoe. At the start of each round, the dealer burns the first card face up and then will burn a number of cards face down. The number of cards burnt is determined by the face-up card (aces are worth 1, and face cards are worth 10).

When playing in a casino, only the dealer or croupier will shuffle the cards, and the shoe is held by one of the players, who will deal the cards. When a player wins, the shoe moves to either the highest winning player or the next person in clockwise order, depending on the casino.

Chemin de Fer is played with six decks shuffled into the shoe. The shoe rotates counterclockwise around the table. Despite the game following a slightly similar structure to Punto Banco, a round uses the same average number of cards.

Baccarat Banque is played with just three decks shuffled into a shoe. Once again, the average number of cards used in a round is the same as Punto Banco.

What Makes the Baccarat Shoe Different?

In most ways, a baccarat shoe is no different to the shoe used in any other card game, such as Blackjack. Today, most players are familiar with Mini Baccarat, in which only the dealer handles the shoe. However, if you play Chemin de Fer or Baccarat Banque, then you will know that the shoe is passed from player to player. Furthermore, those who have learned baccarat online may not realize that this is also the case with Punto Banco.

In fact, theoretically, in all versions of online baccarat, the shoe is passed from player to player, and the player who has the shoe is the Bank. However, this feature has been removed from online baccarat and Mini Baccarat. It actually has no effect on the game’s odds or the gameplay, so it is no great loss.

If you are playing Punto Banco in a land casino and have the option to handle the shoe, then you need to make sure that you know exactly what you are doing. The player with the shoe (known as the Bank) needs to carefully remove the cards and slide them across to the dealer (often called a caller). It is not the player’s job to reveal the card, this falls to the game’s dealer. The dealer will also indicate when it is time to draw more cards from the shoe. If an extra card is removed accidentally, it will be covered and burned.

As long as the Bank position keeps winning, then the shoe remains where it is. When the Bank loses, the shoe is passed to the next player clockwise (remember, this is when playing Punto Banco, the rules differ for other versions of baccarat).

A Six or Eight-Deck Shoe 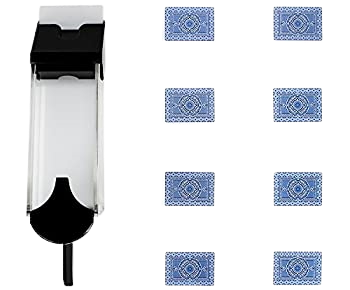 As noted, most games of Punto Banco are played with eight-deck shoes. However, you may occasionally come across six-deck shoes. This has a small effect on the house edge; the fewer decks used, the lower the house edge, therefore, you will want to keep an eye out for six-deck games.

The difference may be tiny, but when gambling, every little thing helps.

The way shoes are shuffled very much depends on where you are playing. For example, if you are playing an RNG baccarat game online, then the shoe will be automatically shuffled between each round. If you are playing Chemin de Fer in a land casino, then often, each of the players will be able to take turns shuffling the cards. Some casinos may also use automatic card shuffling machines. None of these methods will give players an advantage as each of them ensures that the order of the cards has been thoroughly randomized.

What is a shoe in baccarat?
The shoe is simply the box that stores the shuffled cards. It will usually contain six or eight decks of cards, enough cards to ensure that card counting is virtually impossible.
What is follow the shoe betting in baccarat?
This is a system in which players simply bet on the previous position to have won. For example, if the player position wins, then the next bet is played on the player position. If the banker position wins, then the player bets on the banker position, and so on.
How many cards are in a baccarat shoe?
When playing Punto Banco, there will either be 312 or 416 cards in the shoe, depending on whether it holds six or eight decks, respectively. A Chemin de Fer shoe will usually contain 312 cards, and a Baccarat Banque shoe will contain 156 cards.
More Recommended Baccarat Casinos