Enjoy Some Exclusivity with VIP Baccarat

Baccarat already evokes an image of style and panache, and so becoming a VIP player seems a natural progression of this. The most interesting feature of this particular game is the way that the squeeze is conducted. In the land-based venues, the control for this aspect is handed to the player with the highest bids, and the online casino version sets out to emulate this feature. If you’ve placed the highest wager in one of the rounds, this option is exclusively for you, and you’ll be able to choose what happens to the hidden card. It will be revealed to you at your discretion via a video feed, and you can decide how much of the card you’d like to be shown. Better still, the performance is solely for you, which really does give you the celebrity feeling!

Playtech and the Rules of VIP Baccarat

The developer for VIP Baccarat is Playtech, but it has to be said that it can be a little tricky to find an online casino that features this particular variant. When you do manage to track it down though, you’ll find that it is worth the effort. On the face of it, the basics of the game remain the same. It is played with 8 standard 52-card decks, and the table seats seven players. You’ll have all the standard features as well, such as the side bet options and the derived roads. The key difference comes in the way that the squeeze is handled. The premise for this is very simple – if you’ve placed the biggest wager in a particular round, you can decide how the squeeze will be performed.

How VIP Baccarat Is Displayed on the Screen?

In terms of appearance, the VIP version keeps to the standard online baccarat layout. The roads run along the bottom of the screen so that you can follow any patterns that might be forming during play. The stats of the rounds are also displayed in the box on the left, which assists with this process. During play, you can elect to have the cards shown in a separate box, and these can be displayed in a digital form or as a live closeup. There is also the possibility of switching the appearance of the display by clicking on the camera symbol at the bottom of the screen on the left. This alters the layout entirely, by enlarging the playing area and minimizing the dealer. 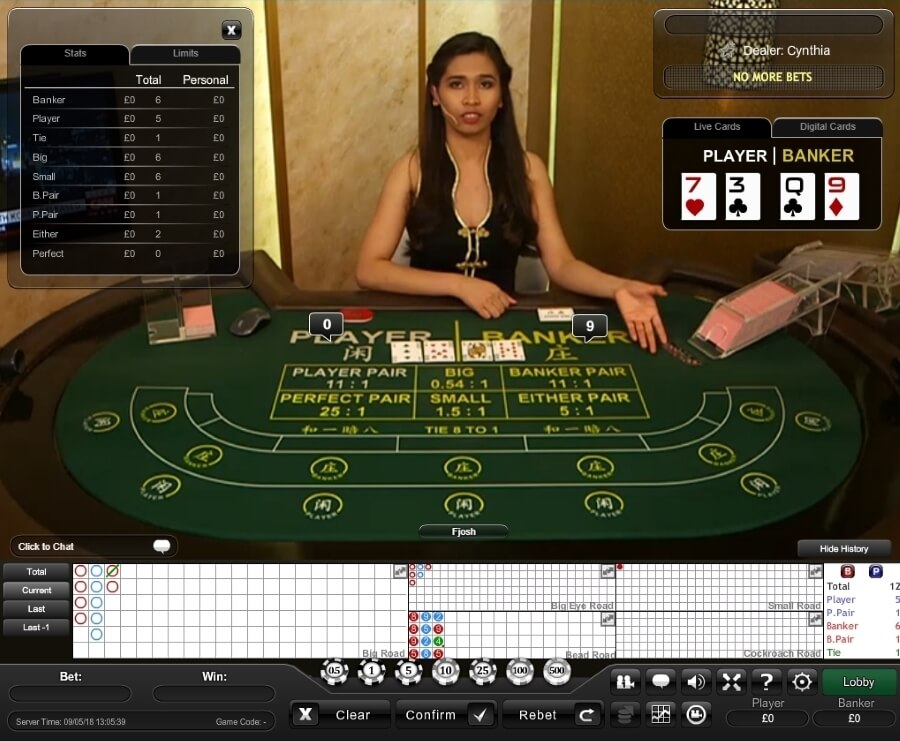 The Screen Layout of VIP Baccarat 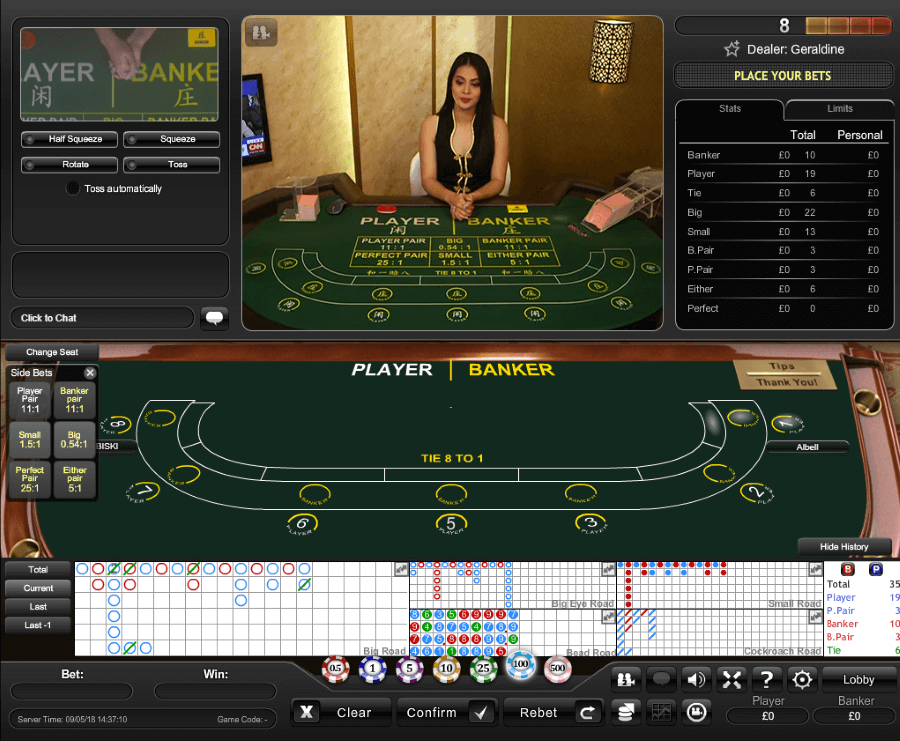 The Choices Available for the VIP Squeeze

Initially, the game proceeds in the usual way. The bets are placed, and the four cards are dealt – two each for the player and the banker hands. When it is appropriate, the standard third card rules are applied. Once this has been completed, the player who has placed the highest bet is given the opportunity to perform the squeeze. There are four options available at this point:

The Options for the VIP Squeeze

In the event that two or more players have placed the same bet, the squeeze goes to the one who placed the higher wager on the previous round. The player position always takes precedence over the banker hand. There is also the option of ‘toss automatically’. If this is selected, the hidden card is automatically displayed to all players.

Watching the VIP Squeeze on the Screen

The options for the squeeze are displayed on the screen in a smaller window during play. If you are using the regular view, this will be on the right of the dealer, but in the switch view mode, this is shown on the left. The cards will be displayed in this window as they are being dealt. If you have placed the highest bet on the table, you will be able to choose how you would like the squeeze to be performed. Once you have made your decision, one of the dealer’s assistants will perform the ritual for you. While this is happening, you will have access to the live feed in a private stream, and unless you have elected to toss the card, the reveal won’t be shown to the other players.

Are There Any Differences in the Overall Format?

The basic premise for the baccarat game remains the same and so do the betting options. The main choices are on either the banker or the player hands, or on a tie. There is also the possibility of side bets, and the choices here are all centered around pairs. You can bet on the banker or the player drawing matching cards, and if you opt for either, this covers both hands. The perfect pairs wager is based on both hands having two identical cards. There are also the big and small bets, in which you are wagering on the number of cards that will be drawn in each round.

If you want to apply some kind of system to the way that you’re playing baccarat, then you will want to pay attention to the patterns in the roads. These run along the bottom of the screen in five different formats, and the more experienced players look to them to develop strategies while they play. There are a number of patterns that can be identified, and these can be used to anticipate how the cards will fall in the next rounds. More detailed information can be found in the help files of the game, and you can download these from the casino websites.

Summing Up the VIP Baccarat Experience

VIP Baccarat adheres to the standard rules and practices, so it will feel very familiar. From time to time though, we all like to be treated as if we are special, and this game provides players with this aspect. It’s great to have the privilege of being the first participant to see the value of the hidden card and to be in control of the squeeze element. If you like the feeling of exclusivity, this variant is definitely the one for you!