As always with their games, Evolution Gaming has set the standard high. Live Baccarat Squeeze makes use of more than fifteen high-definition cameras to ensure that nothing is missed. There are close-ups of the action, so that you can follow every aspect of the reveal as it happens. To draw you further into the atmosphere, there is a chat facility, so players are able to interact with the dealer, and all wins are displayed on the screen after every round.

How to play Evolution’s Baccarat Squeeze

This variant of baccarat is played with eight decks, each of which contains the customary 52 cards. The value attributed to the cards follows the standard baccarat ranking system. Aces are worth 1 point, numbers 2 to 9 are counted by their pips, and all the 10s and the face cards count as zero. You can place your bet on the player, the banker, or on a tie. This pays out at 1:1 for a wager on the player, and at 1:0.95 for the banker, because of the commission attached to this bet. For a tie, the odds are set at 8-1.

At the start of each round, two cards are dealt to both the banker and the player. The dealer then moves one of the small blocks to indicate which of the hands will be squeezed. The third card rules are applied, and whether this is drawn or not depends on the total value of each hand. During the game, the play continues until the cut card is dealt, after which the cards are shuffled.

Evolution Gaming also offers Live Baccarat Control Squeeze. This title adheres to the rituals in the land-based casinos, in which the players are able to reveal their own cards. In the online version, four cards are dealt facedown and are also displayed on the screen with their values concealed. You can choose to reveal the card for yourself by clicking or tapping on the corner to turn it over. There is time allotted within the rounds for you to do this, and you can see the timer counting down to signify the end of the controlled squeeze. Of course, turning the cards over yourself is optional and so you can wait for them to be displayed in the standard way if you prefer. The odds for this variant are the same as those in the regular game, and wins are shown on the screen at the end of each round.

All the Various Options for Placing Side Bets

In the Evolution Gaming version of Baccarat Squeeze, there are a number of optional side bets that can be placed. The first, and the one that the developer considers to be the default one, is pairs. You can wager on either the player or the banker being dealt matching cards, and the payout for this is 11:1. There is also the option to bet on either of the hands being a pair, and this is set at 5:1. A perfect pair is when the cards are identical in both value and suit, and in this instance, the odds are 25:1. If the two cards match for both the player and the banker, the odds shoot up to 200:1.

This game has an optimal return to player rate of 98.94%, and the calculation has been based on the ideal strategy for the banker bet. The side bets offer different percentages. For either a banker or a player pair, the rate is 89.64%. For the either pair wager, the rate is 86.29% and for a perfect pair, this is 91.95%.

The Payout Bonuses for the Different Hands

In addition to the side bets, there are some supplementary payouts in the Evolution Gaming of Baccarat Squeeze. If either the player or the banker wins the round on a natural 8 or 9 by at least four points, a bonus will be paid. The natural win is paid out at 1:1, and a tie is considered a push. The return to player percentage for this is 90.63% for the banker, and 97.35% for the player. There are also bonuses for some of the combinations in the non-natural hands. These are paid out as follows:

Using the Roads to Look for Patterns in the Cards

In baccarat, it can be fun to look for patterns that form during the game. These can help you to decide on the next series of bets to place. Evolution Gaming has a Bead Road for this, which is shown on the left of the screen at the bottom. This chart displays the results of the past round. To read it, you start at the upper left-hand corner, and then follow it downwards. The circles denote wins, and these are categorized as red for the banker, blue for the player, and green for a tie. A red dot on the circle shows a banker pair, and the blue dot is used for the player pair.

The Big Road also follows the patterns in the rounds, and this is displayed on the right at the bottom of the screen. The symbols on this are outlined circles, and these are used to signify any changes in the banker’s winning streak, whether it is favorable or not. Again, red is for the banker and blue is for the player. A green line through one of the circles indicates that the round was a tie. 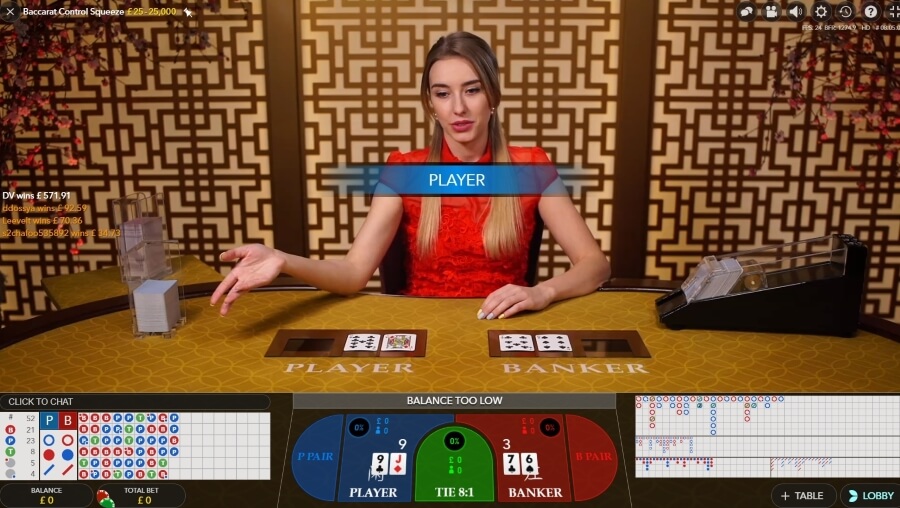 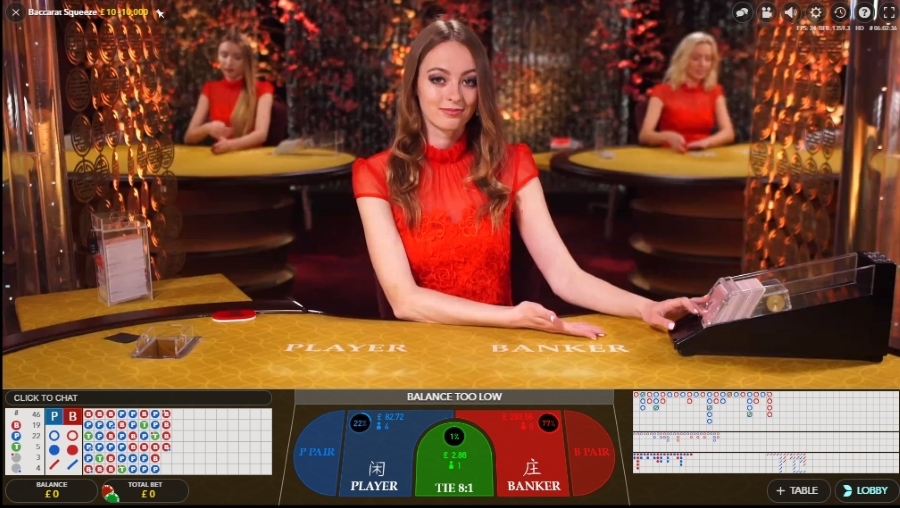 The Derived Roads for the Real Baccarat Enthusiasts!

The dedicated fans of baccarat online like to track the patterns in the cards in all kinds of ways, and Evolution Gaming provides this option with the derived roads. These roads solely show patterns that have been formed during the rounds, and don’t specify whether the wins are attributed to the banker or the player. They don’t show ties or pairs either. Instead, a red symbol displays a repeat in the winning pattern and a blue one indicates that there has been a change.

Evolution Gaming uses three different roads for this type of analysis, and these are displayed at the bottom of the screen on the right-hand side. The Big Eye Road uses outlined circles, the Small Road uses solid circles, and the Cockroach Road uses slashes. An additional symbol is added to each of the grids at the end of every round.

Ramping up the Tension with Live Baccarat Squeeze

Anyone who has frequented the land-based casinos is bound to have come across the performance of the squeeze in baccarat. This is a popular aspect of the game in Asia and particularly features within the venues in Macau. In this version, the cards are dealt facedown, and then one is revealed slowly to the player, one corner or one edge at a time.

The procedure is ritualistic, with the card being turned and twisted between the adept fingers of the dealer. There are teasing glimpses of the suit and of the possible number before the reveal finally happens. For many players, the ceremony of the disclosure is steeped in superstition, as well as the belief, or perhaps just the hope that the drawn-out process will bring about the desired outcome.