Live baccarat is already played at a fairly fast pace. Each round of the standard game, from the time when the cards are dealt to the moment when the wins are paid out, lasts just 48 seconds. Now though, there is the option of speeding up the rate of play even further. The speed version pretty much cuts the playing time in half. In this variant, every round takes a mere 27 seconds, and the difference is palpable.


No sooner have you placed your bets than the cards are being drawn, and the winner’s names are scrolling up the screen. As you can imagine, this faster style of playing really hypes up the sense of anticipation.

The leading provider for Live Speed Baccarat is, without doubt, Evolution Gaming. A quick browse around the websites will soon show that this company’s version is the one that is listed at the majority of the online casinos.

The game is played with eight standard 52-card decks, and the values attributed to the cards during the rounds adhere to the regular rules. The aces count as 1, numbers 2 to 9 are valued by their pips, and 10s and faces are worth zero. The rounds continue until the cut card is dealt. After this, the cards are shuffled, or the shoe is swapped.

In Speed Baccarat, Evolution Gaming allows you to personalize the layout to suit your playing style. If you prefer a bigger wagering area, you can adjust the screen settings by clicking on the camera symbol. This allows you to ‘switch view’, so that the dealer window becomes smaller and the betting options have a larger display. The number of players that are participating in each of the rounds is shown on the screen, and you can follow the wagers that are being made in this way.

At the end of every round, the list of winners scrolls up the screen, so you can see how your fellow participants are getting on! The live chat facility allows you to communicate with the dealer during the game. You can follow your progress in the rounds under the history button on the top right-hand side of the screen. 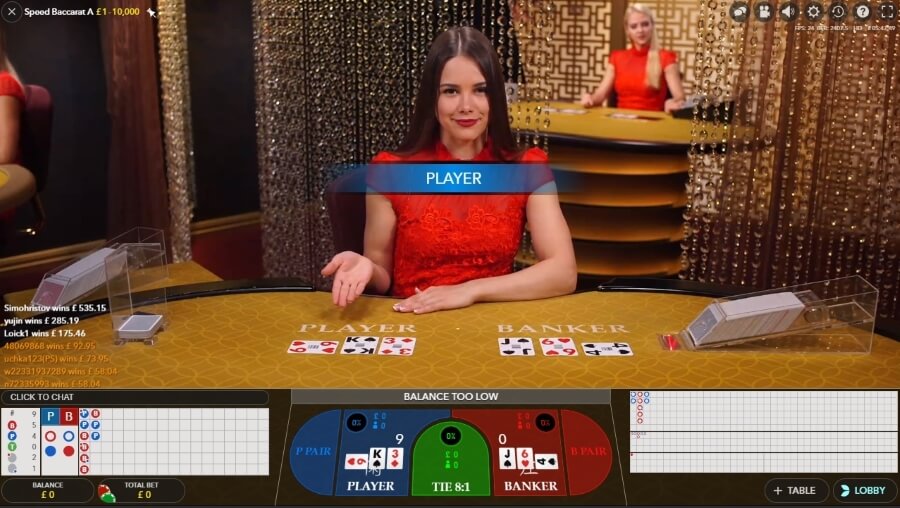 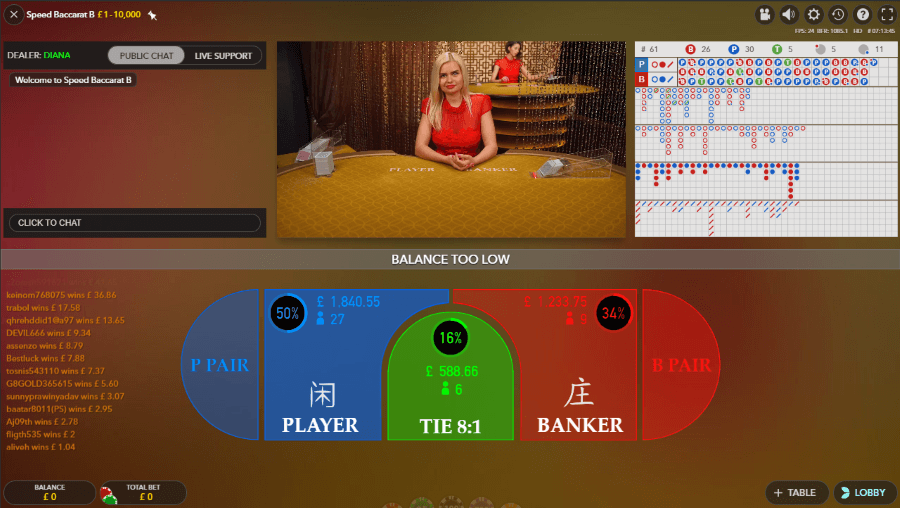 You can Switch View in Evolution Gaming’s Speed Baccarat

Types of Bets and Payouts in Live Speed Baccarat

In Evolution Gaming’s Live Speed Baccarat, as is customary, you have the option of wagering on the banker, the dealer, or on a tie. The third card rules are applied, depending on the total value of each hand. The optimal return to player rate for this variant is 98.94%, and this calculation is based on the best possible strategy for the banker.

A wager on the player’s hand pays out at evens, but the banker’s hand is adjusted to account for the house edge. This is set at 1:0.95, allowing for a 5% commission. A tie is paid out at 8:1. When both the player and the banker hands have the same value, the round is considered to be a push and the wagers are returned.

Placing Side Bets and Calculating the Return to Player Rates

There are several side bets that can be placed during Speed Baccarat, although the rapidity of the rounds leaves very little opportunity for planning a defined strategy! Even so, some of these can be very lucrative, and if you’ve found a system that you like, you might wish to stick with it. The side wagers are next to the main bets on the screen, so you can just click on the choice that you have decided upon. You will be able to bet on the player or the banker’s two cards being a pair, or on them being identical in suit and number.

The odds for this increase to 200:1 if you wager that both the banker and the player will draw identical pairs. There is also a banker and player bonus. This is based on the differences between the value in the two hands. For instance, if there is a 7-point difference, the payout is 6:1, for 8 points, this rises to 10:1, and for 9 points, it becomes 30:1.

The Scorecards and the Patterns in the Roads

Many baccarat enthusiasts like to look for trends in the way that the cards are being played, and in the live baccarat games, this is made easier with the inclusion of the scorecards. These run along the bottom of the screen in Evolution Gaming’s Speed Baccarat, and they take the form of five different grids, which are known as roads. Both the Big Road and the Bead Road show the results of the rounds, although they each use a different format.

The bead road is shown on the left of the screen at the bottom and uses solid circles to keep count of the wins. Red denotes a banker win, blue shows that the player hand won the round, and a green circle indicates a tie. A blue dot in a circle shows that the hand was a pair – red is for the banker, and blue is for the player.

The Big Road is shown on the right and uses outlined circles to mark the results. Every time there is a change in winner, a new column is started. This system makes it easy to identify any winning runs that might be occurring during play. An overview of the total wins is displayed in the left-hand corner at the bottom of the screen.

If a 27-second round of Live Speed Baccarat isn’t quite enough to keep you entertained, in some venues, you can opt to play two different games concurrently. This is done by clicking on the ‘add table’ button, which is at the bottom of the screen on the right-hand side. This takes you back to the lobby where you can pick something else from the selection there. You can choose another of Evolution Gaming’s titles, or you could even go for something else entirely.

Both games will now be shown on your screen and will run simultaneously. If you wish to return to a single version, it’s easy enough to do. You simply click the red cross in the corner of the one you want to cancel, and you’ll be back as you were.

Live Speed Baccarat is the perfect choice if you like your card action to be fast and furious. This version keeps to the standard rules, and so it’s easy to follow. However, with a new round starting approximately every 27 seconds or so, the pace is quick, and it leaves little time for pondering on your next move. Many players feel that this faster rate of play adds to the excitement and takes the game into a whole new level.