Chemin de Fer is one of the oldest documented versions of baccarat, dating back to the Napoleonic era in France. It was the non-banking version that was played at the time along with Baccarat Banque. Chemin de Fer was a very popular version among the French nobility and quickly spread to England and the USA.

Nowadays, it’s not a version you can find at online casinos, as the live dealer baccarat version is usually Punto Banco or Mini. However, it is still played at some land-based European casinos, France in particular, so if you’re headed for such a table, here’s a quick walk through the rules and etiquette. 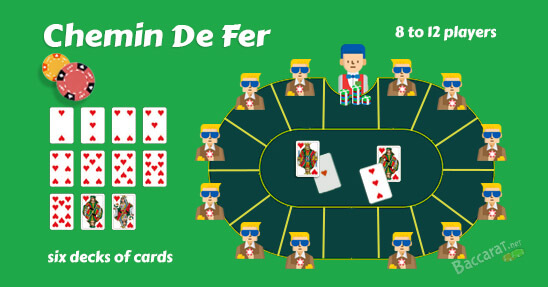 Chemin de Fer is different from the other Baccarat versions – Punto Banco and Baccarat Banque – in that here, players bet against each other. A player holds the bank and sets aside a wager that covers the bets of his / her opponents. The game is played at large kidney-shaped tables that have 12 seats for players two for dealers, plus one for a banker.

The banker stands between the first and the last players, facing the two dealers. The minimum number of players is 8 and the maximum – 12. The game is played with six decks of cards contained in a shoe which moves across the table in a counterclockwise manner. Presumably, this gave the name of the game – the shoe moving across the table as each player gets to deal the cards resembles the movement of a train, hence Chemin de Fer which means “railway” in French.

There are two bet squares on the table in Chemin de Fer – Banque for bets on the Banker and Reliquat is designated for the part of the Banker’s bet which is not covered by the other players. In the middle of the table there are two slots – a Panier that contains used cards and Cagnote where the casino’s 5% commission on winning bets is set aside.

In Chemin de Fer, there’s no financial backing on the part of the casino as it doesn’t take part in the betting process but it does offer the equipment necessary for the game and provides dealers. Before commencing the game, the dealer shuffles the cards, hands them over to the player on his right who shuffles them as well and passes them on to the next player. After all players have shuffled the cards, the dealers shuffles them once more and hands them to the player on their left who cuts them with a cut card.

In this Baccarat version, players take turns to be the Banker, starting from the player on the right side of the dealer. The other people at the table are the Players. At the start of each round, the Banker places a wager at their discretion and then, each player can either go all-in against the Banker by calling “Banco” or make a different wager they’re willing to risk. If more than one player calls “Banco”, the priority is given to the player to the Banker’s right and is called “Banco prime”. If no one has called “Banco” and the players’ bets don’t cover the wager of the bank, it can be covered by the bets of the people watching the game around the table. If the players’ bets exceed the Banker’s bet, the Banker can raise the bank or have the excess bets removed from the table.

Initially, at the start of each round the bank will draw four cards in total – two for the Player and two for the Banker. In a sort of a bet behind situation, the player with the highest wager represents all other players. If more than one player has the same highest bet, the player first in order will play the hand for all players.

The cards are dealt face-down, both the Banker and the Player look at their cards and if either hand totals one of the naturals – an eight or a nine – they announce it, show their cards, and the round ends automatically, with the bigger value between 8 and 9 winning. If there isn’t a natural win, additional cards are drawn according to the following rules:
The Player’s Rule:

When the Player wants to draw an additional card, they announce “Carte”. The Player reveals their cards after the Banker has revealed theirs first. There’s a choice in Chemin de Fer as the first two cards are dealt face-down so if the Player has a 5, they can use some tactics to throw their opponent off by changing the style of play. Depending on the tactics at the total 5, players can be: 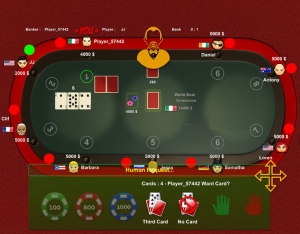 Additional cards are always drawn face-up, since the initial hands have already been revealed, and the decision whether a third card is drawn or not is based on their total value. If the Player’s total is higher than the Banker after all cards (including the additional ones) have been drawn, the payout is 1:1 for all players. In case the result is a tie, all bets remain on the table and are played in the next round. If the Banker has the winning hand, the players’ losing bets are passed to the bank. Then, the Banker decides whether to go on in the role of the bank. They may give up this role at any time by saying “Pass”.

However, an unwritten rule in Chemin de Fer’s etiquette requires that they keep the role for at least one more hand after a winning game. It’s in the noble spirit of Chemin de Fer that players are given a chance to win their money back. Passing the bank, in, say three rounds is perfectly normal and won’t be met with objections. If no player at the table calls Banco expressing a desire to hold the bank, then the next player in the order becomes Banker. Casinos usually set minimum amounts for the bank and the bets.

Chemin de Fer is considered to be the original version of baccarat as we detail in our History page. However, that’s not completely true considering the name of the game in French means “iron road” or “railway”. The railway wasn’t introduced in France up until 1834.

A game similar to baccarat has been played in Italy in the 15th century which means that the version is a much later rendition of the first baccarat games. Chemin de Fer was a popular pastime for the French aristocrats and even after gambling was made illegal in France in 1837, it continued to be played in illegal gambling establishments and gained huge popularity in the UK and Europe.

The first casino table for Chemin de Fer at a Vegas casino was opened in 1959 and was called Chemmy. However, there are historic documents that point out Chemin de Fer was played in the USA in the end of the 19th century. The version was popular at the strip until the introduction of Punto Banco which is now the baccarat version played at American casinos.