The banking counterpart of Chemin de Fer, Baccarat Banque was played at the same time in France and could be considered the first banking casino version of baccarat still played today. The game is similar to Chemmy with the big difference that the casino always holds the bank. Baccarat Banque is also called Baccarat à Deux Tableaux or Baccarat on Two Tables. In this article, we will outline the rules of the version and compare it to the other popular variants.

The Banque version is widespread across land-based casinos in France and other European countries. In Monaco, it began to be played at especially designed table configuration of two conjoined tables that can seat 10 – 16 players. The dealer sits at the middle, dividing the table into two right and left tables, thus allowing more players to join a round. Bystanders are allowed to place bets only if the players’ bets don’t cover the bank bet. Baccarat Banque is played with three decks of cards instead of the traditional six or eight cards for Chemin de Fer and Punto Banco.

How to Play Baccarat Banque

The gameplay of Banque is very similar to Chemin de Fer with some small differences. Mainly, the fact that while players do take turns to be the bank, they don’t play against each other, and the player who is being the Banker for the round doesn’t have to cover the other players’ bets.

While in Chemin de Fer, the role of a Banker is passed around whenever the Banker loses, in a game of Banque, the person who has made the largest wager remains Banker until the shoe has been fully played out or has finished their bankroll and cannot continue to place any more bets. The player with the highest stake is chosen to be the Banker and they take the seat opposite the dealer. When everyone is seated, the game can begin. And here’s how it plays out. 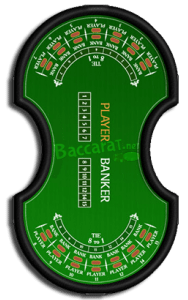 The rules for drawing additional cards are the same as those for Chemin de Fer. Generally, experts advise that you draw a third card if your hand is zero to four and that you stand when the cards total six or seven. If you’re the Banker at Baccarat à Deux Tableaux, you need to consider the two player hands, and it’s recommended that you focus on the hand that has the higher wager.

Although the Banker doesn’t have to give up the role if they lose a round, they can be challenged for it by another player at any given time. The player who wishes to claim the role, announces “Go bank” and places a wager equal to the Banker’s bet. The bet can either be placed on only one Player hand or split between the two hands at both tables. Each player can “Go bank” up to three times and it they don’t succeed after the third time, they lose the right to claim the role again. If the challenge is successful, they can assume the Banker role.

Baccarat Banque is played similarly to Chemin de Fer, including the rules for drawing additional cards. If either hand has a two-card eight or nine, the cards are revealed and the eight or nine make a natural win. However, if none of the hands is a natural, a third card can be drawn which has to be revealed immediately. When all cards and drawn and the hand is complete, the round is settled and all bets – paid out.